Transphobia at antisemitism Conference in London

1) A few days ago in the German city of Muenster, a well-known liberal university town in the northwest of the country, a pride or Christopher Street Day march happened. A nasty young man yelled at lesbians. A trans man intervened and told the homophobic agitator to keep quiet. 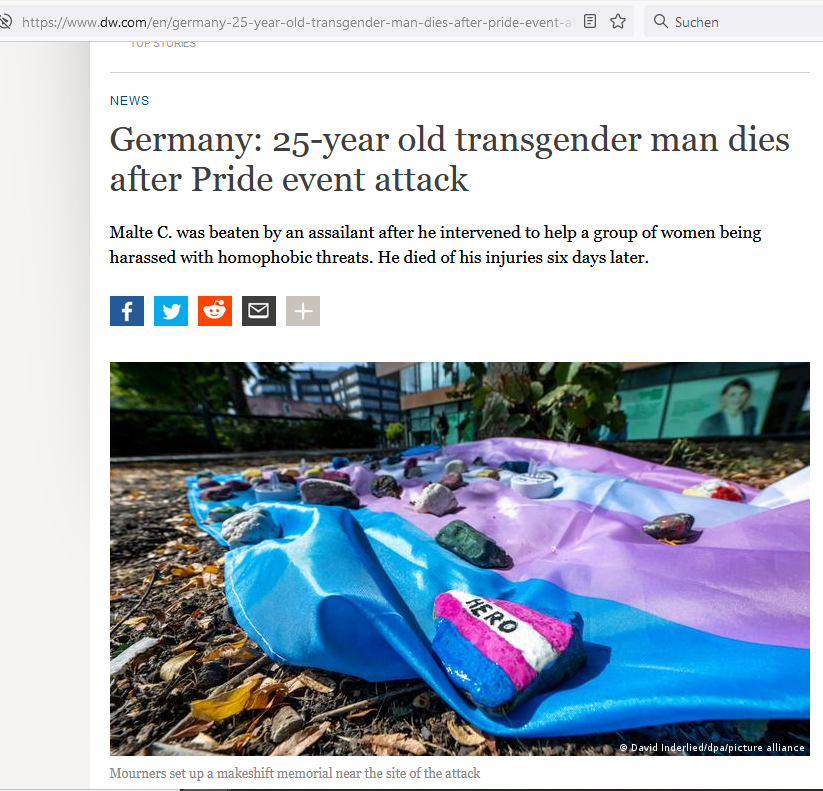 The agitator, though, a 20 years old trained boxer from Chechnya in Russia, who has been living with his mother in Germany for eight years, punched Malte C., a few days later Malte died in a hospital. Right-wing extremists often join Muslim homophobic agitators. But there is more homophobic and transphobic activism, take Smotrich and Gvir and their huge religious scene as an example, and even “left-wingers” as we will see soon.

2) Yeshiva University in New York City rejects a Jewish queer group on campus. The US Supreme Court, with a 6-3 majority of religious fanatics and right-wing extremists, who also reject abortion as a human right, now ruled that Yeshiva University is right to do so. The Times of Israel today reports:

The request noted that the university’s club application process for the 2022-2023 school year has opened, and continues until September 12. Recognition would grant the Pride club funding and other benefits.

The university said in the statement that the lower court’s ruling “would force Yeshiva to put its stamp of approval on a club and activities that are inconsistent with the school’s Torah values and the religious environment it seeks to maintain.”

Same-sex orientation is largely forbidden in Orthodox Judaism. The Jewish Queer Youth activist group said in a statement that the university was “demonstrating the very homophobia that they claim does not exist on campus.

3) UK bestselling author and billionaire J.K. Rowling, some might know her name from the “Harry Potter” series, just released her new 1000+ pages fiction book. It is in part obviously based on her own experience as a transphobic author in the UK:

J.K. Rowling, who rose to fame as the author of the Harry Potter series, is known for writing about magical subjects and fantasy worlds. But her latest book bears more than a passing resemblance to reality — and, critics say, not in a good way.

The Ink Black Heart is the sixth installment of Rowling’s thriller series Cormoran Strike, which she penned under the pseudonym Robert Galbraith. The 1,024-page tome started raising eyebrows as soon as it hit stores on Tuesday. 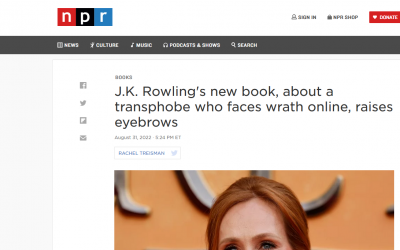 Contrary to Rowling’s fantasies, the real victims are not transphobic people like herself, but trans people, as Forbes reported: 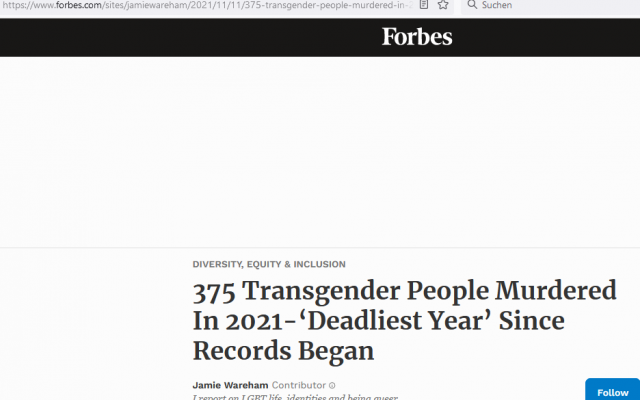 In 2021, 375 transsexuals were murdered worldwide, 70 percent of them in South America, 30 percent in Brazil alone. When I see Syrian or Iraqi refugees in Germany, for example, downtown, who stare at and threaten transsexuals, then I know how close these migrants and the New Right are, but also some traditional left and liberal feminists on issues of religion, family and gender.

In many countries there is increasingly anti-gender legislation and rhetoric, as in Poland, Hungary or even in the oh-so-western, enlightened Brexit Great Britain, as Forbes Magazine reports:

Meanwhile, a global recession in trans rights continues, with countries from Hungary, Poland and even the U.K. seeing rising transphobia, anti-LGBTQ policies and rhetoric.

In the U.K., transphobic hate crime reports have quadrupled over the last six years. 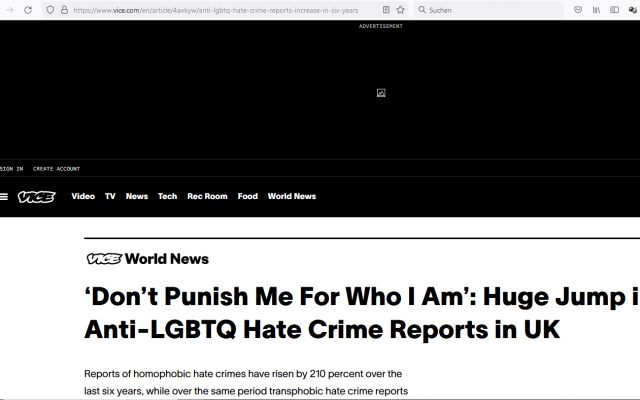 4) The new London Centre for the Study of Contemporary Antisemitism, founded and headed by sociologist David Hirsh, is part of the transphobic climate in the UK. One of the many speakers at the event September 12-13, 2022 in London, will be former left-wing anti-Zionist agitator Kathleen Hayes. The title of her talk is: 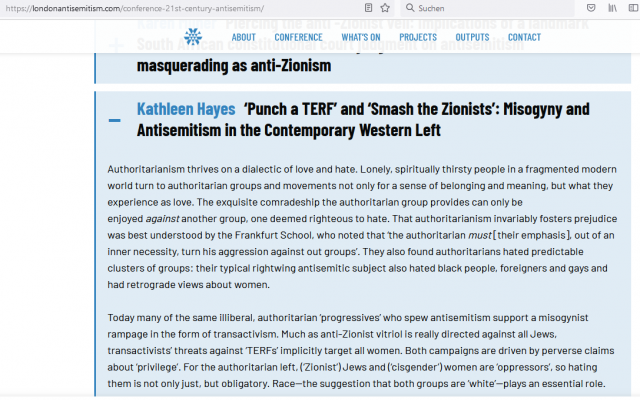 In 2022, Kathleen Hayes has already published two articles about her approach regarding trans people, antisemitism, and about TERF (Trans Exclusionary Radical Feminists). First, she published with the “Intellectual Dark Web”, the right-wing extremist Australian online journal Quillette, which in 2019 framed the “American Nazi Party” as poor “Conservatives” which have been blocked by Twitter. Then, Hayes published a similar piece with the mainstream UK journal Fathom. Here she writes:

Once truth is up for grabs, all truths are up for grabs. A mind persuaded to reject the reality of biological sex is one unlikely to recognise basic facts about the Holocaust, or about living Jews.

This transphobic ideology is disgusting. Kathleen Hayes insinuates that everyone who does not feel as a woman or man, might equally reject historical truths like the Shoah. You might expect such kind of hardcore transphobic discourse among the Far Right, but here we are in the left-wing mainstream, as she still pretends to be a left-winger, more or less.

Transphobia is a deadly ideology. The murder in Muenster a few days ago, the new book by Rowling, the homophobic and transphobic climate and ruling at Yeshiva University and the US Supreme Court and finally the appearance of transphobic agitator Kathleen Hayes at that conference on antisemitism in London next week are indicating a shocking wave of both transphobic action (murder, intimidation, court ruling, banning from campus) and ideology.

I recall uncounted events and conferences on antisemitism, including the big Global Forums for Combating Antisemitism in Jerusalem in 2008, 2009, 2013 and 2015, where most speakers always stressed “it starts with the Jews, but it does not end with the Jews” or “Jews are the canary in the coal mine”. No one ever meant that, though. Otherwise, there would be a huge outcry about David Hirsh and his conference, featuring transphobic author Kathleen Hayes.

In addition to transphobic ideology, Hirsh himself promotes fake news about the war in Ukraine like this one. In the following tweet Hirsh promotes fantasies about antisemitism, where you cannot find antisemitism at all: 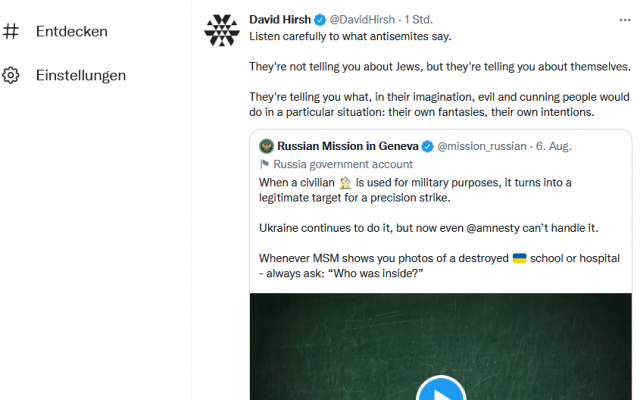 I argued in my above quoted working paper for BICSA:

Who does David Hirsh mean by “antisemites”? He means the Russian mission in Geneva, from which he posts a message under his tweet that that embassy-like mission had posted on Twitter. What is this Russian tweet about? The Russian tweet refers to mainstream media, which could not help but state that Ukraine often hides and positions weapons and artillery in schools or hospitals and Russian attacks would then appear as attacks on civilian targets. Then, the world attacks Russia for “war crimes”. Attacking civilians in such a way would indeed be a war crime. But what if Ukraine intentionally uses civilian infrastructure for their own soldiers and weapons to provoke Russia to attack theses civilian facilities?

Firstly, what could be antisemitic about the statement by the war party Russia? Why does David Hirsh, the sociologist and antisemitism expert from England, write that you should listen carefully to what the antisemites are saying and underneath is this tweet that reflects the current Russian line? What’s antisemitic about that?

Because that is exactly what is happening, as a report by Amnesty International…

Also the UN argues based on facts, contrary to Hirsh’s obviously obsessive hatred of Russia:

The UN report on civilians as human shields, though, emphasizes that both sides, the Ukrainians and the Russians, use this perfidious tactic of civilian shields and the instrumentalization of civilians.

The Jewish Queer Youth activist group said in a statement that the university was “demonstrating the very homophobia that they claim does not exist on campus.”

“Instead of listening to what they are actually asking for, a safe space where they can form friendships and community, YU is deliberately confusing queer youth’s need for self-esteem with a non-existent demand for sexual behavior,” the group said. 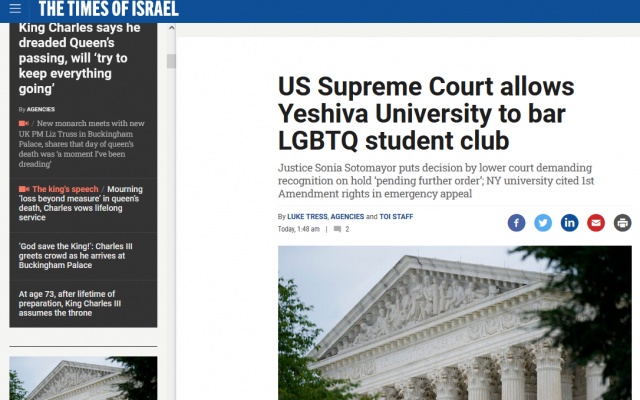